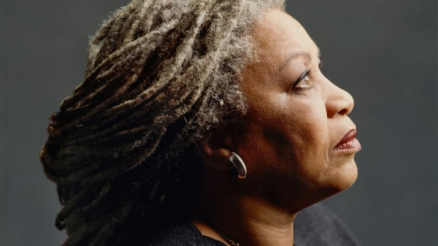 I was starting to read Alice Walker’s novel The Temple of My Familiar the morning of August 6 when I learned that literary great Toni Morrison had died the day before. So it seemed time to write a long-overdue piece about female authors of color.

Of course the women I’m about to mention are AUTHORS — one word, stop. But being female and not being white informs much of their fiction. Their writing expresses anger over racism and sexism, illustrates the evils of those isms, depicts coping mechanisms for women and people of color, and also includes all kinds of other personal, social, political, and non-political elements.

Not much I can say about Toni Morrison (pictured above) that hasn’t already been said. Nobel Prize winner, Pulitzer Prize recipient, professor, book editor, and more. I’ve read only two of her novels — Beloved and Sula — but found her writing about the black experience in the U.S. and other topics to be brilliant, evocative, harrowing, and highly original. Song of Solomon is prominent on my to-read list.

The Temple of My Familiar is my second Alice Walker novel — after the ultra-memorable The Color Purple, of course — and it’s an absorbing/heartbreaking book with magic-realism elements and fascinating characters from different places and times. Haven’t finished it yet.

Perhaps my favorite living female author of color is the biracial Zadie Smith — whose London-set debut novel White Teeth is at times hilarious, at times dead-serious, always multicultural, and published when Smith was only in her mid-20s. Two books later came the set-in-U.S.-academia On Beauty, also a winner.

Another stunning debut novel was The God of Small Things by Indian author Arundhati Roy. A heartbreaking book with many socioeconomic and political overtones.

Then there’s American author of Indian descent Jhumpa Lahiri, whose excellent novels The Namesake and The Lowland look at the immigrant experience and more.

I’ve also enjoyed reading Terry McMillan, whose work is somewhat lighter than the other authors I’ve mentioned but still compelling. Waiting to Exhale, How Stella Got Her Groove Back…

Some additional deceased authors of color who shouldn’t be missed include Zora Neale Hurston and her masterful Their Eyes Were Watching God, which chronicles a black woman, her three marriages, and more; science-fiction writer Octavia E. Butler, known for novels such as the searing time-travel work Kindred and the apocalyptic Parable of the Sower; the Nigerian-born Buchi Emecheta, perhaps most famous for her gripping semi-autobiographical novel Second Class Citizen; and Maya Angelou, who wasn’t a novelist per se but whose autobiographies (including I Know Why the Caged Bird Sings) read like novels.

Sort of/sort of not “eligible” for this post is the great French novelist Colette (Gigi, The Vagabond, etc.), who had some black Caribbean ancestry.

I’ve obviously left out many authors. Your favorite women-of-color writers and your favorite works by them that I mentioned or didn’t mention?

I’ll be skipping an August 18 post next Sunday because of a vacation week. Back on August 25!

In addition to this weekly blog, I write the award-winning “Montclairvoyant” topical-humor column for Baristanet.com. The latest weekly piece — written by my cat 🙂 — is here.