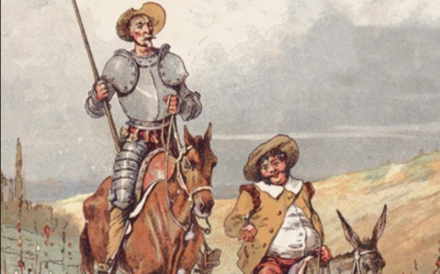 Sidekicks! Whether in real life or literature, the word means partners/assistants who are somewhat lower in rank. Yet sidekicks are often as interesting, charismatic, and comedic as their ostensible superiors — or even more so. And the interaction between sidekick/”sidekickee” — and the way they complement each other or not — can be fascinating.

A new favorite sidekick for me is Robin Ellacott of J.K. Rowling’s fabulous Cormoran Strike mystery novels — the second of which (The Silkworm) I read this week. This Robin to Cormoran’s Batman (?) works for Strike in his modest private-investigation office, but she’s much more than an ultra-competent secretary — she wants to be a private investigator herself, and helps Strike solve cases. Meanwhile, the brave/brainy twosome have a strong (though at times tense) working relationship/friendship that means a lot to both of them.

There are echoes of Rowling’s Harry Potter and Hermione Granger in Cormoran and Robin (Emma Watson, who played Hermione in the Potter movies, even gets a cover-of-a-magazine cameo in The Silkworm), but Ellacott and Strike are very much their own characters in the mysteries written under the pen name of Robert Galbraith.

In older literature, among the most famous sidekicks are Sancho Panza to the eccentric Don Quixote in Miguel de Cervantes’ Don Quixote (the two are pictured atop this blog post), Samwise Gamgee to fellow hobbit Frodo Baggins in J.R.R. Tolkien’s The Lord of the Rings, and Dr. Watson to Sherlock Holmes in Arthur Conan Doyle’s detective novels and stories.

Panza and Samwise have many similarities — they’re both short, smart, funny, courageous, resourceful, and invaluable to their “masters.” Heck, they’re clearly equal to, or more impressive than, who they’re sidekicking with. Dr. Watson, though far from dumb, seems like almost a lightweight next to sleuth extraordinaire Sherlock. But the genial Watson is an important character — narrating things (much of the time), expressing admiration for/awe of Holmes, etc. He’s in many ways a reader surrogate, and helps ground things in a sort-of reality — like calm servant Nelly Dean does amid the hyper-emotional drama in Emily Bronte’s Wuthering Heights.

Then there’s Diana Barry, who’s often with best friend Anne Shirley when the initiative-taking Ms. Shirley gets into all kinds of quirky situations in L.M. Montgomery’s Anne of Green Gables. The more passive Diana tends to be a reluctant participant.

Getting back to current fiction, we have Sgt. Frances Neagley in Lee Child’s Jack Reacher series. She appears only periodically — Jack often goes it alone, of course — but when she does show up she’s a great help to Reacher as he fights the bad guys. Neagley and Reacher share a military-police background and the qualities of discipline, competence, bravery, loyalty, and…being loners.

Can a character have more than one sidekick? Why not? An example of this would be Dorothy and her three sidekicks: the Scarecrow, Tin Woodman, and Cowardly Lion in L. Frank Baum’s The Wonderful Wizard of Oz.

That reminds me that there’s something about the notion of sidekicks that often has them accompanying their “superiors” on a quest, an adventure, a trip to some destination. At minimum, they tend to appear in very plot-oriented novels.

Who are your favorite sidekicks in literature?

In addition to this weekly blog, I write the award-winning “Montclairvoyant” topical-humor column for Baristanet.com. The latest weekly piece — about gentrification, rent control, an expensive stairway fix, and more — is here.