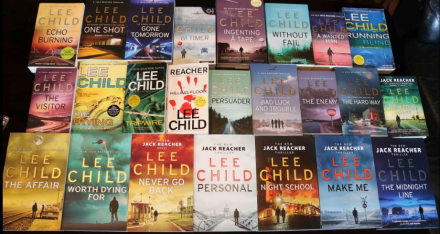 Some fiction authors are rather formulaic while others vary their approach with almost every novel — and I like both kinds of writers.

Plus formulaic authors often offer enough differences in each of their books to satisfy a reader’s yen for variety, and non-formulaic authors frequently have recurring elements in their works. So there’s some blurring between the two “camps.”

Lee Child of Jack Reacher series fame also has his formula: The roaming Jack goes to a new place, trouble arises, Reacher deals with that trouble, Jack leaves town. But then there’s the variety: a new locale in almost every book, different kinds of trouble in almost every book, new supporting characters in almost every book, and so on. The 24th Reacher novel, Blue Moon, was released late last month, and I have no doubt it will be another Child page-turner when I get to it.

In each of his 20 Rougon-Macquart novels published between 1871 and 1893, Emile Zola featured one or more members of those R-M families and usually offered an overarching theme: alcoholism in The Drinking Den, retailing in The Ladies’ Delight, mining in Germinal, art in The Masterpiece, rail travel in The Beast in Man, etc. So, those compelling Zola books were similar in a way, yet the characters of course had varied personalities and fates, and the aforementioned themes were also quite varied.

Some authors who often avoid a formula from novel to novel?

Margaret Atwood is certainly one. She’s expertly handled contemporary fiction (such as Cat’s Eye), historical fiction (Alias Grace), and of course “speculative” fiction (including The Handmaid’s Tale and its recent sequel The Testaments). But there are certain commonalities amid Atwood’s genre-jumping, most notably a feminist sensibility and other kinds of social awareness.

We also have J.K. Rowling. After she finished her seven blockbuster Harry Potter books, she wrote the decidedly non-magical/very sobering novel The Casual Vacancy. Then Rowling switched things up again with a crime series (four so far) starring private investigator Cormoran Strike. She skillfully nailed each of the three genres — and, while her approach in each is different, there are common elements such as deep sympathy for the underdog and a keen awareness of evil in the world.

Authors you feel fit into either the formulaic or non-formulaic categories?

In addition to this weekly blog, I write the award-winning “Montclairvoyant” topical-humor column for Baristanet.com. The latest weekly piece — which covers overly aggressive driving and many other topics — is here.

50 thoughts on “Formulaic vs. Non-Formulaic Authors”