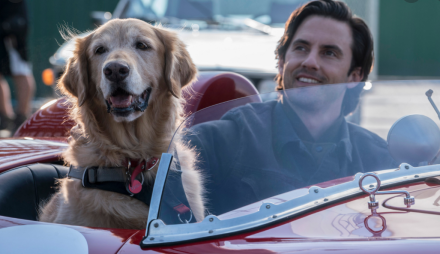 (Those recommenders are credited at the bottom of the comments section.)

Anyway, I tried to think of another theme inspired by Stein’s poignant, inventive, narrated-by-amazing-dog-Enzo novel and came up with…grandparents in literature. The 2008 book’s grandparents Maxwell and Trish are significant secondary characters, and they’re horrible people — especially Maxwell. They’re nasty from the start to son-in-law Denny — the novel’s race-car-driving human star (shown above with Enzo) — and then things escalate as the older couple wrongly/sickeningly seek custody of grandchild Zoe: the daughter of Denny and his cancer-stricken wife Eve, whose parents are Trish and Maxwell. The blatant lying and depravity of the rich, entitled Maxwell reminded me of Trump.

Of course, many other grandparents — whether in fiction or real life — are good people who frequently dote on their grandchildren. (And are happy to again have kinship with kids minus the day-to-day responsibility.) Some examples of admirable grandparents include Penelope Keeling of Rosamunde Pilcher’s The Shell Seekers, Lechuza Blanca (aka “White Owl”) of Isabel Allende’s Zorro, and Claire and Jamie of Diana Gabaldon’s Outlander series. Brief summaries of those four characters:

Despite some major disappointments in life, the independent/young-at-heart/makes-the-best-of-things Penelope treats her not-all-nice extended family well.

The Native-American Lechuza is a spiritual mentor to her part-Spanish grandson Diego de la Vega. “White Owl” helps Diego discover that his guardian animal is a fox (“zorro” in Spanish), and he becomes a masked, sword-wielding vigilante under that name.

Claire is a 20th-century doctor who meets 18th-century Scottish warrior Jamie when she goes back in time, and the two have quite an eclectic grandchildren situation several decades later. Their biological grandkids (Jem and Mandy) are the children of a couple (Claire and Jamie’s daughter Brianna and her husband Roger) who toggle between the 1900s and 1700s. Plus Claire and Jamie are the adopted grandparents/step-grandparents of several other kids (the children of Fergus and Marsali) who always live in the 18th century.

More mixed on the good/not-so-good spectrum are the Greek-immigrant grandparents in Jeffrey Eugenides’ Middlesex. Eleutherios and Desdemona aren’t bad people, but happen to be…brother and sister. (Yes, they married despite being siblings.) This eventually has major genetic consequences for their grandchild Callie, the novel’s main protagonist.

There’s also Sully of the Richard Russo novel Nobody’s Fool. He’s a flawed, not-always-responsible, somewhat-decent guy who develops a cordial relationship with his grandson Will despite the fact that Sully was not an always-there father to Will’s dad Peter.

And how about having a grandmother as strong-minded and eccentric as Frieda Haxby Palmer in Margaret Drabble’s The Witch of Exmoor? Never a dull moment, for better or for worse.

Rebecca and Isaac are also rather quirky grandparents in Anita Diamant’s The Red Tent, which partly fictionalizes the lives of some major and minor Biblical characters. The novel stars Dinah, who’s the granddaughter of Rebecca and Isaac (and daughter of Jacob and Leah).

Some grandparents are middle-aged or not much older, while others are quite advanced in years — meaning the death of grandparents is definitely a thing in many novels. For instance, the two Joad grandparents pass away relatively early in John Steinbeck’s The Grapes of Wrath, but they’re around long enough for us to see how their feisty personalities have been passed on to some extent to the next generations.

In addition to this weekly blog, I write the award-winning “Montclairvoyant” topical-humor column for Baristanet.com. The latest piece — which discusses topics such as my town’s proposed hybrid school model this fall — is here.

55 thoughts on “Grandparents in Literature Can Be Grand…or Not”