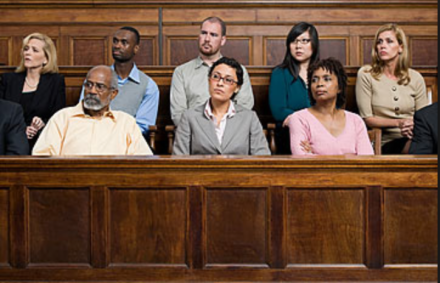 I did a lot of waiting this past week.

Why? I was called for jury duty on July 17, when I waited six hours in a Newark, New Jersey, courthouse before my name was called to be a possible juror for a trial. A few minutes later, myself and about 50 others crowded into a courtroom, where people were picked in random order to be questioned by the judge as well as by lawyers for the plaintiff and defendant in a car-accident case. Five of the eight needed jurors were chosen before the process was suspended until the following morning. Then came an overnight wait for everyone at their respective homes.

The next day, more jurors were chosen, some were dismissed, and I became perhaps the 13th or 14th person questioned. I ended up being picked for the trial, which took place on July 18 and 19 — with many waiting moments amid the proceedings, such as when the judge periodically called the lawyers to the front for sidebar discussions when an objection was made. Our congenial, diverse jury ended up voting 7-1 in favor of the defendant.

Anyway, with all that waiting, I had plenty of time to try to think of a new blog post for today. My first thought of course was to discuss lawyers and court cases in literature, but I had done that already, in 2015.

Then it occurred to me to write about WAITING in literature, and I don’t mean what fictional servers do at restaurant tables.

Depicting characters waiting for something is not necessarily boring in the right authorial hands. It can mean slow-building, compelling drama — drama that has the reader asking questions such as: How long will the wait be? Will the wait result in something positive or negative? How will the characters react to/handle the wait? That can show a lot about them.

I first thought of The White Dawn, because I had finished that novel the night before my jury duty started. James Houston’s absorbing book is set in Eskimo territory in the 1890s, when three lost white men end up joining the native camp. There’s subsequently a LOT of waiting: for a ship looking for the white men to possibly arrive, for Eskimo hunters to hopefully return with food when everyone is almost starving, for warmer weather to come, for colder weather to come back, etc. (One thing I liked about The White Dawn was that it was told completely from the Eskimos’ perspective; Houston had lived among them for nine years — many decades after the time in which the novel is set.)

Obviously, any novel starring a castaway — such as Daniel Defoe’s Robinson Crusoe — is going to have the stranded character do a lot of waiting.

Another novel with intense waiting is Nevil Shute’s On the Beach, in which the Australian characters wait for deadly radiation from a nuclear blast to eventually reach their country.

And there’s Fyodor Dostoyevsky’s Crime and Punishment, in which Raskolnikov agonizingly waits to see if he’ll get caught for the two murders he committed. (Of course, the second part of the novel’s title offers a clue about that. 🙂 )

Or how about the innocent Edmond Dantes of Alexandre Dumas’ The Count of Monte Cristo waiting years in an island prison for either death or a chance to escape?

In Geraldine Brooks’ novel March, the wife and daughters from Louisa May Alcott’s Little Women wait for their husband/father to return from the Civil War.

Lily Bart of Edith Wharton’s The House of Mirth does a different kind of waiting — for the right guy to marry. She is financially desperate, but wants to wed for love, not just for money.

Twentieth-century guy Sam Fowler of Darryl Brock’s If I Never Get Back sequel Two in the Field WANTS to return to the 19th century to reunite with the woman he fell in love with in the first novel. But it’s a long wait.

Those are just a few examples of waiting in literature; do you have some others? (I’m sure you do. 🙂 )

In addition to this weekly blog, I write the award-winning “Montclairvoyant” topical-humor column for Baristanet.com. The latest weekly piece — which mentions the World Cup, among other things — is here.

62 thoughts on “The Wait Show”