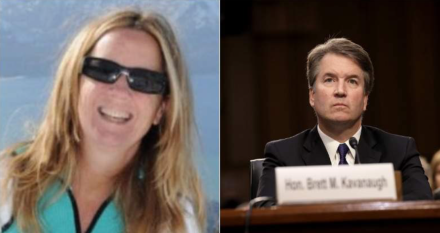 As the Brett Kavanaugh drama unfolded this month, I thought about fictional characters who seem admirable on the surface yet are in reality bad people.

Kavanaugh, of course, is Donald Trump’s nominee for the U.S. Supreme Court. I never felt Kavanaugh was a good guy — he’s an ideologue with nasty, ultra-conservative views on women, the poor, civil rights, guns, the environment, and more. But to at least some people, he seemed like a decent and friendly “family man.” That persona was blown to bits when Dr. Christine Blasey Ford credibly accused him of having sexually assaulted her several decades ago. To me, there was no motive for Dr. Blasey Ford to lie — she knew she would be deluged with hate mail, social-media abuse, death threats, and other horrors from right-wing Republicans. The only coming-forward upside for Dr. Blasey Ford (shown with Kavanaugh in separate photos above) was to tell the truth.

The first character who came to mind was Perry in Liane Moriarty’s fantastic Big Little Lies. In the eyes of society, he’s a charming and respected banker. Under the surface, he has a sordid past and present that includes ugly violence against his wife Celeste and other women.

Then there’s Willie Stark, the Huey Long-like politician in All the King’s Men. He’s charismatic, and seems idealistic and populist. In reality — a reality that grows stronger as Robert Penn Warren’s famous novel goes on — Stark is a corrupt hypocrite.

Another complicated politician is Hamm Sparks of Fannie Flagg’s engaging Standing in the Rainbow. He’s hardworking — raising himself up from poverty — and appears to be admirable in other ways as well. Popular with the electorate, too. But Hamm eventually reveals himself to be too slick, very right wing, and an adulterer (cheating on his shy wife Betty Raye).

In Andre Dubus III’s compelling House of Sand and Fog, the married Lester Burdon is an apparently upstanding law-enforcement guy until he becomes enamored with Kathy Nicolo and starts doing rash and illegal things to try to help her regain the home that’s subject to an epic ownership dispute.

The most recent novel I finished — Susan Moore Jordan’s absorbing mystery The Case of the Slain Soprano — turns out to have a murderer who was thought to be the nicest of guys. An excellent actor, I guess.

Oh…and there’s a complicated version of good but not actually good in J.K. Rowling’s iconic Harry Potter series when the admirable Alastor “Mad-Eye” Moody seems to turn bad. But that’s because he was kidnapped and impersonated by another character, Barty Crouch Jr.

Which fictional characters fitting this topic do you most remember? And any thoughts on the Kavanaugh situation?

In addition to this weekly blog, I write the award-winning “Montclairvoyant” topical-humor column for Baristanet.com. The latest weekly piece — about a school stairway collapse in my town — is here.