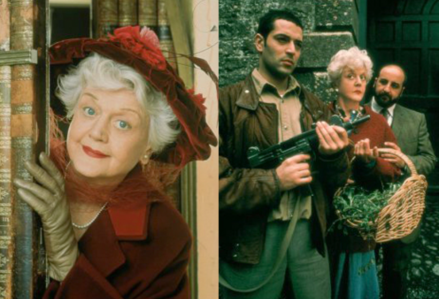 The only way to start this is by mentioning Herman Wouk, who’s still alive at…103! He’s the author of modern classics such as The Caine Mutiny, Marjorie Morningstar, The Winds of War, and War and Remembrance; I need to read at least one of them! And To Sir, With Love novelist E.R. Braithwaite was 104 when he died two years ago.

Many writers who lived many decades did their best work in their 20s and 30s, many others peaked in mid-career, and some finally put it all together only when approaching senior-citizen status. For those in the latter two groups, we’d never have gotten to enjoy their A+ efforts if they had died young.

For instance, the now-94-year-old Rosamunde Pilcher wrote 22 novels before The Shell Seekers — her masterpiece — came out when she was 63. Maybe the author had to be that age to depict 60-something protagonist Penelope Keeling so convincingly and wonderfully? Pilcher went on to pen five more novels before retiring in 2000.

The Unexpected Mrs. Pollifax, a novel I read this month, was written by Dorothy Gilman in her 40s — so she’s an example of an author who peaked mid-career, decades before dying at age 88. The book, which stars a widowed New Jersey homemaker in her 60s who becomes a CIA operative, is both hilarious and action-packed — a tough combination to pull off. (A scene from a screen version is pictured above.)

A prime example of a long-lived author who peaked early is of course Harper Lee, who was in her mid-30s when To Kill a Mockingbird rocketed to fame; she died at 89. Upton Sinclair was still in his 20s when The Jungle was published — though, unlike Lee, he wrote dozens of subsequent (albeit lesser-known) novels into his 80s. He passed away at 90.

Other authors who were with us for many decades? Renowned mystery writers P.D. James and Agatha Christie lived to 94 and 85, respectively, while sci-fi greats Ray Bradbury and Ursula K. Le Guin died at 91 and 88. (Yes, I know those authors sometimes worked outside the genres I mentioned; Le Guin, for instance, was also known for her fantasy fiction.) Comedic writer P.G. Wodehouse, creator of the iconic Jeeves, lasted until 93.

Then there’s poet Robert Frost (88) and poet/memoirist Maya Angelou (86). And while known mostly for his nonfiction, W.E.B. Du Bois wrote several novels during his 95 years.

Among my favorite novels and short stories by some of the writers in the above three paragraphs? And Then There Were None (Christie), Fahrenheit 451 (Bradbury), Stones for Ibarra (Doerr), Foreign Affairs (Lurie), Of Human Bondage (Maugham), Caravans (Michener), Yellow Flowers in the Antipodean Room (Frame), “Gimpel the Fool” (Singer), Wide Sargasso Sea (Rhys), One Hundred Years of Solitude (Márquez), Jude the Obscure (Hardy), Evelina (Burney), Beloved (Morrison), “The Aleph” (Borges), “Proof Positive” (Greene), Uncle Tom’s Cabin (Stowe), Steppenwolf (Hesse), Suttree (McCarthy), True Grit (Portis), “Stopping by Woods on a Snowy Evening” (Frost), and I Know Why the Caged Bird Sings (Angelou).

Your favorite writers (ones I mentioned or didn’t mention) who lived to 85 or older? You’re also welcome to name some slightly younger ones. 🙂

In addition to this weekly blog, I write the award-winning “Montclairvoyant” topical-humor column for Baristanet.com. The latest weekly piece — a comedic year in review — is here.