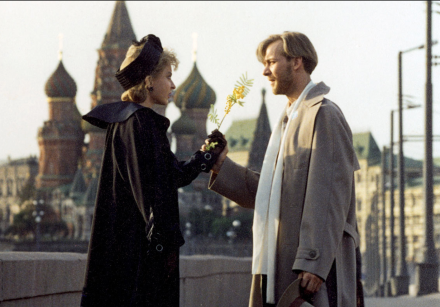 During Trump’s hellish American presidency, thoughts can turn to the devil in literature. Satan or Lucifer or Beelzebub or whatever you want to call him, that immortal guy is an evil yet rather charismatic fellow good for plenty of drama — and perhaps some comedic hijinks, too.

All that is certainly part of Mikhail Bulgakov’s The Master and Margarita — a raucous, sobering, hilarious novel I read last week that stars “the devil in disguise” (to quote an Elvis Presley song) and his memorable assistants. As in many books featuring the Prince of Darkness, this brimstone bro is depicted as both real and symbolic — partly functioning as a device to satirize the Stalin-ruled Soviet Union. (Pictured atop this blog post are the book’s title characters — with The Master not the devil but rather a 20th-century Russian who writes a novel, within Bulgakov’s novel, set in the time of Jesus.)

Set in the Russia of the 19th century, Fyodor Dostoyevsky’s classic The Brothers Karamazov includes a long, significant, incredibly entertaining cameo from Satan.

American literature also has its share of Beelzebub-ian appearances. For instance, Douglass Wallop’s The Year the Yankees Lost the Pennant uses the familiar trope of someone selling their soul to the devil to get something they crave; in Wallop’s novel (which inspired the hit musical Damn Yankees) that something is becoming a baseball star.

Short stories I’ve read that fit this blog post’s sulfurous theme include Stephen Vincent Benét’s “The Devil and Daniel Webster” and Nathaniel Hawthorne’s “Young Goodman Brown.” In the second tale, Lucifer is more a philosophical presence than a “real” presence.

In the poetry realm, there’s of course Milton’s Paradise Lost.

Among the devilish works I haven’t read are Dante’s Inferno, Goethe’s play Faust, and Anne Rice’s novel Memnoch the Devil. Not sure Lauren Weisberger’s The Devil Wears Prada quite fits here…

Your favorite fictional offerings with a Satanic element?

In addition to this weekly blog, I write the award-winning “Montclairvoyant” topical-humor column for Baristanet.com. The latest weekly piece — partly about a state politician who (surprise, surprise) isn’t keeping some of his campaign promises — is here.