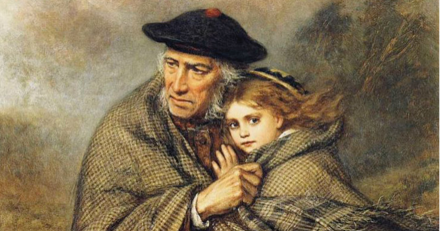 Today is Father’s Day, so, in an effort to write a blog post with the most unoriginal theme ever, I’m going to discuss some of my favorite dads in literature — seven to be exact. I’ll go backward in time, starting with the most recent releases.

Subhash Mitra of Jhumpa Lahiri’s 2013 novel The Lowland marries Gauri, the pregnant wife of his revolutionary brother Udayan after the charismatic-but-irresponsible Udayan is killed. The uncharismatic Subhash becomes a devoted father to Bela even as Gauri turns out to be a distracted mother who eventually abandons the family.

Arthur Weasley of the Harry Potter series is fun, brave, and a bit spacey. That last quality is not surprising given how large the Weasley family is and how much he and other sympathetic characters in J.K. Rowling’s 1997-2007 books have to deal with the havoc-wreaking Lord Voldemort.

A secondary character in Octavia E. Butler’s 1993 post-apocalyptic novel Parable of the Sower is the wise and kind (but prone to wishful thinking) minister/professor father of protagonist Lauren Olamina, who calls him “the best man I know.” Enough said.

There’s of course Atticus Finch in Harper Lee’s To Kill a Mockingbird (1960). The widowed dad of Scout and her brother Jem is warm to his children, disciplines them some but not too much, and is of course a highly principled attorney who defends an innocent African-American man. The white Atticus doesn’t comes off as well in the early TKAM draft Go Set a Watchman, but…

Adoptive father Matthew Cuthbert in Anne of Green Gables (1908) is shy, quiet, and far from confident, but is a gentle, kind farmer who develops a wonderful relationship with the precocious Anne.

Then there’s Silas Marner (pictured at the top of this blog post). He’s a bitter, lonely miser in the first part of George Eliot’s 1861 novel, so I didn’t see his heartwarming adoption of Eppie coming — and how effective (albeit somewhat bumbling) his parenting would be.

Finally, I’ll mention Bob Cratchit of Charles Dickens’ A Christmas Carol (1843). Cratchit lives a difficult life as Ebenezer Scrooge’s underpaid/overworked clerk, but has a positive outlook on life and is a devoted dad to his six children — including the physically challenged Tiny Tim.

Your favorite fathers in literature?

In addition to this weekly blog, I write the award-winning “Montclairvoyant” topical-humor column for Baristanet.com. The latest piece — which has a dual election theme — is here.

72 thoughts on “A Few Favorite Fathers in Fiction”