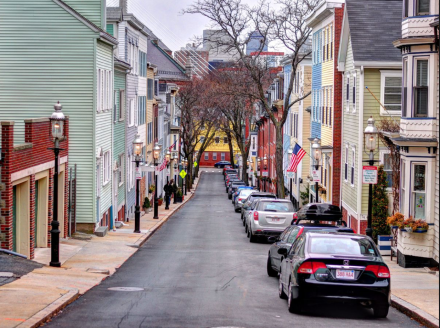 I’d like to state that some novels capture a state — the feel, the ambiance, the streets, etc.

That obvious fact occurred to me last week as I read Tom MacDonald’s The Charlestown Connection, a mystery set in Massachusetts — mostly Boston’s Charlestown section (pictured above). The novel has interesting characters, but just as interesting is its you-are-there descriptions of various places in Beantown.

Many other novels, of course, do the same with other states in the U.S. I won’t give examples from all 50 states, but will mention one or more books from more than 20 states — listed alphabetically. They might or might not be the ultimate novels set in those states, but they’re in the discussion. And my apologies to non-U.S. readers of this blog for today’s U.S.-centric post. 🙂

Alabama: Fannie Flagg’s Fried Green Tomatoes at the Whistle Stop Café contains a double bonus — great evocations of The Yellowhammer State’s present (as of the novel’s 1980s publishing date) and past.

Arizona: Terry McMillan’s Waiting to Exhale is the story of four women who live in Phoenix.

Arkansas: Charles Portis’ True Grit has an 1870s setting in places such as the rural Dardanelle area and the more citified Fort Smith.

California: Way too many novels to name are set in The Golden State, but, to offer just some examples, there are various John Steinbeck books (East of Eden, The Grapes of Wrath, Cannery Row, and so on). Also, the crime fiction of Walter Mosley (such as Devil in a Blue Dress) and Sue Grafton (her alphabet mysteries) expertly conveys the vibe of Los Angeles, Santa Monica, Santa Barbara (the city that Grafton’s Santa Teresa is based on), and other California locales.

Florida: Also set in the 1870s, The Yearling captures the atmosphere of a rural/backwoods part of The Sunshine State as author Marjorie Kinnan Rawlings focuses on a boy and his fawn.

Georgia: Carson McCullers’ Reflections in a Golden Eye — a hypnotic 1941 novel that includes an unusual (for its time) look at homosexuality — takes places at an Army base in The Peach State.

Hawaii: David Lodge’s Paradise News is initially set in the United Kingdom but then moves to Hawaii — with the state’s many charms depicted amid the plot involving an ill relative and a romance.

Indiana: Booth Tarkington’s The Magnificent Ambersons, which has a strong theme of “old money” vs. “new money,” is set in Indianapolis.

Louisiana: Anne Rice’s multigenerational The Witching Hour spends many chapters in New Orleans — an evocative place for a spooky novel.

Maryland: A number of Anne Tyler novels, including The Accidental Tourist and Ladder of Years, are set in or near Baltimore.

Minnesota: Sinclair Lewis placed many of his memorable novels in the Midwest, with Main Street set in The North Star State.

Mississippi: The setting of many a William Faulkner novel, including As I Lay Dying and Light in August.

Missouri: The adventures in Mark Twain’s The Adventures of Tom Sawyer happen in The Show-Me State.

Pennsylvania: The Keystone State’s two biggest cities are covered in Lisa Scottoline’s Philadelphia-set mysteries (such as The Vendetta Defense) and in more than one Michael Chabon novel (including Wonder Boys).

Rhode Island: In Jhumpa Lahiri’s The Lowland, Subhash leaves India for graduate studies in Rhode Island and stays there after college as the novel’s dramatic events continue to unfold.

South Dakota: The roamin’ Jack Reacher goes to The Mount Rushmore State in Lee Child’s 61 Hours, and boy is it cold and snowy in that thriller.

It of course helps if authors live in/have lived in a state they’re writing about, but there’s always visiting and/or researching the place — as Lee Child did for 61 Hours.

I know I left out many states, authors, and books. Which novels do you associate with certain states? If it’s a state you live or lived in, did the author render things accurately and interestingly?

In addition to this weekly blog, I write the award-winning “Montclairvoyant” topical-humor column for Baristanet.com. The latest weekly piece — about the November 6 election — is here.