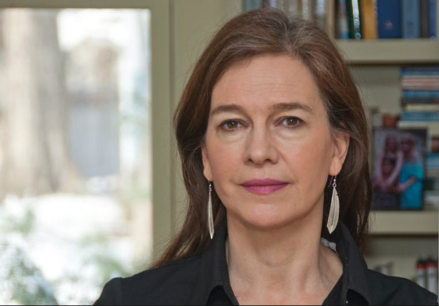 Sometimes the main or almost-main character in a novel or short story is an inanimate object. And sometimes that object can seem almost as alive as characters who are actually alive (albeit fictionally).

My latest object of (literary) desire is the painted drum in Louise Erdrich’s absorbing novel The Painted Drum, which I’m in the middle of reading. As is often the case with fiction’s noteworthy objects, the non-living thing is named in the title. And this Native-American artifact has a personality of sorts, crafted beauty, and a major impact on the plot. (Ms. Erdrich is pictured above.)

Other prominent objects in literature of course include houses, cars, art, jewelry, statues, and more.

When a house is the title “character,” there’s frequently something about it that makes the human protagonists uneasy. For instance, Jane Austen’s part-spoof-of-Gothic-fiction Northanger Abbey features a character (Catherine Morland) whose overactive imagination gets a bit out of hand when she visits the titular dwelling. The house in Shirley Jackson’s The Haunting of Hill House is legitimately scary, the one in Nathaniel Hawthorne’s The House of the Seven Gables is not exactly a happy place, and the abode in Daphne du Maurier’s The House on the Strand is the jumping-off point for some weird time travel.

More positive is the house in L.M. Montgomery’s The Blue Castle. It’s not literally a blue castle, but it’s the dream home Valancy Stirling has always wished for but never thought she’d have — and Valancy ends up living there with a man she loves through a very improbable set of circumstances.

Speaking of time travel a la du Maurier, there’s also H.G. Wells’ The Time Machine — with that titular device a vehicle of sorts.

Cars? The automobile “character” I first thought of is the one in Stephen King’s From a Buick 8 that’s a portal to a spooky place.

Art? Donna Tartt’s set-in-recent-times novel The Goldfinch is built around Carel Fabritius’ 1654 painting “The Goldfinch,” which is taken from a museum by protagonist Theo Decker amid the chaos of a terrorist attack that kills his mother and others. The priceless painting subsequently has a giant effect on Theo’s life.

Jewelry, gems, and such? Wilkie Collins’ The Moonstone — an early novel in the detective genre — “stars” a huge diamond. The also-huge, very valuable pearl in John Steinbeck’s novella The Pearl is not the positive find Kino and his family hope it will be; it turns out to be a disaster — as does the article of jewelry in Guy de Maupassant’s devastating short story “The Necklace.”

Then there’s of course J.R.R. Tolkien’s The Lord of the Rings, in which the trilogy’s most-powerful ring is as consequential (to the plot and the future of Middle-earth) as it gets.

Statues? There’s the stone pillar in Erich Maria Remarque’s The Black Obelisk that can be seen as a symbol of the nascent Nazi movement in 1920s Germany. And there’s the famous statuette that’s the title of Dashiell Hammett’s novel The Maltese Falcon, starring detective Sam Spade.

Another sleuthing work focusing on an object is Edgar Allan Poe’s short story “The Purloined Letter,” featuring detective C. Auguste Dupin. Poe also put inanimate things in the titles of several other tales — including “The Cask of Amontillado,” “The Oblong Box,” and “The Oval Portrait,” among others.

Oh, and there are the fateful overpasses in The Bridge of San Luis Rey by Thornton Wilder and Alexander’s Bridge by Willa Cather.

Novels and stories you remember that prominently feature objects?

In addition to this weekly blog, I write the award-winning “Montclairvoyant” topical-humor column for Baristanet.com. The latest weekly piece — about a disruptive snowstorm and more — is here.