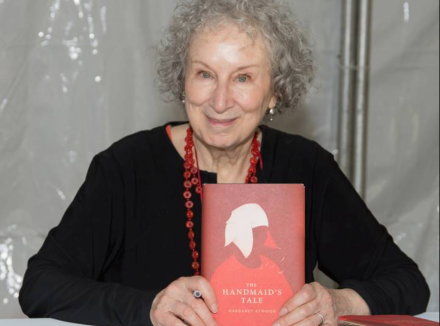 After reading last week that Margaret Atwood is writing a follow-up to The Handmaid’s Tale, I thought about which sequels — and series — spanned the most time.

Atwood’s famous, feminist, dystopian novel came out in 1985, and The Testaments will be published in 2019 — making for a gap of 34 years. Not quite the 36-year-period between Stephen King’s The Shining (1977) and its sequel Doctor Sleep (2013), but plenty long.

Why gaps like that? Authors such as King and Atwood (pictured above) are of course busy writing many other books, and may not want to revisit the same characters — at least until several decades go by. In Atwood’s case, one spur for the coming sequel is the high popularity of the current The Handmaid’s Tale television series. Also, the Republican Party’s current far-right/misogynist politics make her 1985 novel prescient and very relevant to today.

The Testaments will reportedly begin 15 years after The Handmaid’s Tale ends. Other sequels can of course be set closer or farther away in time from the original novel.

Can many-years-later sequels be better? Sometimes. Heck, the authors have often become more mature writers. But they might also be past their prime, a bit tired, and not have as many new ideas. Still, numerous fans don’t mind if a sequel isn’t as good; they’re just happy it exists. Plus there’s money to be made for the authors — not that superstar writers like Atwood and King need it. 🙂

Other one-sequel, multiple-sequel, or series scenarios spanning many a decade?

Agatha Christie featured Hercule Poirot in 40-plus novels and short-story collections for more than a half-century — from 1920’s The Mysterious Affair at Styles into the 1970s. And Christie’s Miss Marple character starred in more than 10 books from 1930 (The Murder at the Vicarage) into the ’70s.

Then there are Honore de Balzac’s and Emile Zola’s many-book sagas containing stand-alone but interlinked novels featuring characters who pop in and out, sometimes as lead protagonists and sometimes as supporting players. Balzac wrote his La Comedie Humaine works from 1830 to the late 1840s — not that long a period because of his relatively early death, but an extraordinarily prolific period that produced a whopping 90-plus novels (such as Old Goriot and Cousin Bette) and stories! Zola penned his 20 Rougon-Macquart novels (The Drinking Den, Germinal, etc.) from 1871 to 1893.

Other sequels and series you can name with many-year publishing spans? And/or any comments about the ones I mentioned?

I will not be posting columns on December 9 and 16 (because of another trip to Florida to deal with my late mother’s estate and some other reasons). Back on December 23! I’ll still reply to comments under already-published columns. 🙂

In addition to this weekly blog, I write the award-winning “Montclairvoyant” topical-humor column for Baristanet.com. The latest weekly piece — written by my cat! — is here.